Jack Sparrow vs. Blackbeard on Pirates of the Caribbean: On Stranger Tides 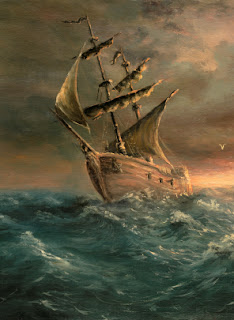 I always thought the character Jack Sparrow resembled Blackbeard--ahh … That is to say in fashion sense. But even Blackbeard had a similar quirky sense of humor.

In one tale about Blackbeard it stated while he was in his cabin drinking, he blew out a candle and drew his pistols, firing them aimlessly beneath a table and shot Israel Hands his sailing master in the knee. If he didn't kill one of them now and then, he said, "They would forget who he was."

I love pirate stories; love to read about it, write about it and to watch it in the movies! Johnny Depp brings to life Jack Sparrow; I can’t imagine any actor playing the role.

While writing for Wikinut the first article I chose to write about was Blackbeard http://guides.wikinut.com/Blackbeard%3A-A-Pirate-Who-Reigned-Terror-at-Sea/ktxu_81h/ Unfortunately, I couldn’t work it in about the shooting incident in his cabin or the fact that he never made any prisoner walk the plank, but the facts I found and wrote about thickened my interest to write more articles about pirates.

It would be cruel not to end this post without a trailer to the movie, Pirates of the Caribbean: On Stranger Tides.

Posted by Angelique Newman at 4:43 PM